How do you talk to your kids about big hard subjects? You talk to them. Then, you give them something to do about it.
Kids know and feel a lot about troubles in the world. They might not always know the details of the problem, but they know something isn’t right. They might think it funny at first that a shipment of yellow rubber ducks fell off a freighter and is adrift in the Pacific. Then they realize that not all trash in the water is cute. Most of it is ugly and all of it can make us sick.
So what do you do? Well, for one thing, you can send them to the water’s edge and have them count pieces of debris along with thousands of other folks around the world who are part of the International Coastal Cleanup project. Each year, volunteers walk their coasts and up trash. Before they toss it in the receptacle, however, they record what they’ve found. Cigarette butts, plastic bags, shotgun shells and casings, cars, and appliances. (You can see the full data set here.)
The ICC project lets kids of all ages do something not only to clean up our messes, but also contribute to scientists’ research into our oceans. These most basic skills, to observe and record, form the foundation of all scientific research. This is work that’s done by citizens. Dr. Loree Burns, writes in her third book, “Citizen science, then, is the study of our world by the people who live in it.” Her book is Citizen Scientists: Be a Part of Scientific Discovery from Your Own Backyard.
Learning from litter 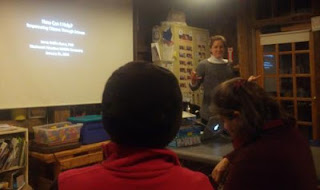 Dr. Burns talked to a dozen of us in meeting room at the Wachusett Meadows Audubon Sanctuary the other night. She tells her story easily, of graduate studies in biochemistry, the ways that kids push our lives in directions we’d not planned or even thought possible, and, as noted earlier, the challenges of talking to kids about big and sometimes troubling ideas.
So when she read a brief article Dr. Curt  Ebbesmeyer, an oceanographer who was tracking debris, including rubber duckies, that was riding the Pacific currents, she saw a way to continue with her scientific work and, at the same kids, keep kids like hers, and such as hers, busy with meaningful projects. That became book the first, Tracking Trash.
Is Mom killing the honey bees?
Her second book, The Hive Detectives, takes readers on an investigation to find out what’s killing the honey bees.
At one point during the research cycle, the media misreported that bees were hypersensitive to cellphone radiation as well as chemicals we use in our yards and farms. The kids heard those stories as well. When the kids saw their mom using her cellphone, they panicked for bit.
Yes, the radiation may not be good for the bees, but one phone call, by itself, isn’t going to destroy a hive. A lot of factors go into the colony collapses. “There’s not one thing responsible for the death of the honey bees,” said Dr. Loree.
Rarely does science tie things up nicely and put them in a box. Maybe there are seven factors contributing to an outcome that we don’t like; maybe there are 70. If we eliminate or reduce two or 10, will that make enough of a difference.
We’re not sure.
You know what? Kids are OK with that. They can work the ambiguities as long as they know their work is making a difference somehow.
Ladybugs are carnivorous.
The Lost Ladybug Project is part of the work to find out why certain types of ladybugs were increasingly difficult to find. Professor John Losey is an etymologist  at Cornell, researching ladybugs. Through field work with his young son, Ben, he discovered that children could be valuable research assistants. So valuable, in fact, that two Virginia siblings, age 10 and 11, found the first nine-spotted ladybugs seen in eastern North America in 14 years.
Ladybugs, by the way, eat aphids, making them a favorite for farmers. Ladybugs, by all accounts, don’t like the taste of humans of any age.
What if you don’t have a backyard?
We talk about our world as if it’s universal when, in fact, its only the world that we see. When Dr. Loree talked to a group of kids in an urban school, they were puzzled at the thought of looking for anything in a backyard. Outdoors was often dangerous.
It turns out that you can raise sunflowers and other plants in a window box, the flowers of which can attract bees, even in the city. We may think of nature as only existing in the countryside. In a world increasingly urban, nature follows us. It looks different, but it’s still nature and it still needs scientists.
Kids pay attention to what we do and how we do it.
If we, as adults, are afraid because we don’t have the answers or afraid of the answers we’ve found, kids will notice. They’re not always looking for a definitive answer. They’re looking for ways of dealing with all this stuff, dealing with change, dealing with things that aren’t going well, that are scary. If we can show them how to understand problems by observing and recording, they might not feel so helpless. They’ve got something to do that part of something bigger than themselves.
When we figure that out, for ourselves as well as for the kids, we get better, too. That’s how it is that Dr. Loree can say, as she did at the end of the presentation the other night, “There’s a piece of this that is, for me, just joy.”