What’s been weirdest among the many weird aspects of this weekend’s weather has been nearly two days of precipitation with a strong northwest wind.
In typical patterns, systems move up the east coast, dragging a cold front behind them. The cold front shifts the wind to the northwest and brings in colder and drier air. In this case, the wind started to shift on Friday. The rain continued, hard, through Friday and Saturday. Lighter on Saturday night, we saw or thought we saw some snow mixed in.
Three months earlier, we would have called the a three-day Nor’easter.It’s not uncommon for winter storms to strengthen as they get into the Gulf of Maine. Bombing out, they call it. The weather charts don’t show that this happened, only that the systems moved slowly.
There are breaks in the clouds now. There are whitecaps on the lake.
The fireplace, even if we had good, dry wood, doesn’t put out enough heat to fight against the wind and cold. The porch of the camp has single-pane windows with broad exposure to the northwest wind coming across the lake. When I was a kid, we had a pocket door and a pocket window on the wall that separated the porch from the main room. My father removed those during a renovation in the 70s. We could have used them this weekend.
We’re burning wood that’s long past its prime, stuff that was cut five or more years ago. My plan had been to cut and split the fallen hemlock that’s in the front yard. There was still plenty of good meat on much of the tree. Split, it’ll be good for both the fireplace and sauna. It was too cold and rainy on yesterday and on Friday, though, for me to spend very long outdoors.
The rain will stop. The winds will calm and shift again. By the end of the coming week, it’ll be 90.

With temps climbing into the 60s today, I decided to tempt fate and move the snow blower from the front yard to its summer place by the sheds. The last chunk of snow, well, really, ice, is almost gone from our deck.

The corner of our yard, sheltered from the sun, is still snow-covered. At the camp, there’s still a foot or more of ice that’s been pushed into the cove by the strong northwest winds.

I’m guessing that it will take at least a week, maybe even two, before the cove is open. We’re still hoping to open up around the first of May.

It wasn’t enough that Holden won the top spot in last weekend’s snowfall totals. We need to keep our edge and so are trucking in more snow.

A few weeks ago,we had small amount of snow and ice. We also did not have any sand or ice melt. Son Mike and his crew were making repairs on our house. Mike used bird seed to give some traction. It worked pretty well.
Last Monday, we had more ice, so I tossed more bird seed on the ramp and driveway. The ensuing warmth and rain washed away the ice, leaving the seeds. Birds large and small are taking care of the rest. 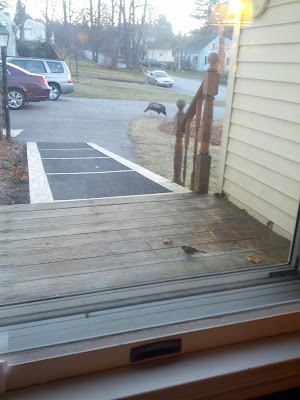