At lunch today, I talked with a former professor about some of the issues that he sees with his students. This, by the way, is at Amherst. The students who get in there did so because they knew how to present themselves to their high school teachers and admissions boards. They knew how to win.
Many student wrote papers that were focused on a narrow topic, crisply-defined, but with little connection to other ideas or domains. These students did well well because they showed a clear answer to a specific, albeit esoteric, question. Their research skills were limited to delivering a precise answer with no ragged edges.
If you ask Google Maps (or any GPS system) for turn-by-turn directions, you get good results. Using those directions will get you where you intend to go, but with a curious side effect. You are delivered as in a tunnel, without context. 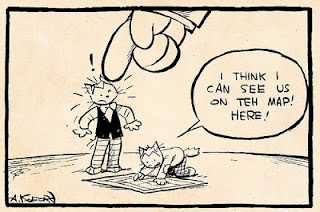 Time was, we studied maps and knew not only the path, but also the frame of reference. Recently, I had to travel to a part of a nearby town that was unfamiliar to me. The person I was visiting said that his street is right near the so-and-so school. I used Google Navigation. It made no mention of the school as a prominent reference point. Instead, it said, “in 600 feet,  turn left.” I got where I was going, but Google told me nothing of the fact that this family lived near a school.
It turned out that living near a school was very relevant to this person and his wife because his kids could walk to school. Google told me what was true, but not what was meaningful.

The Brits have a dessert that’s tasteless in both senses of the word. Spotted Dick is, according to various sources, a boiled suet pudding with raisins or currants stuck to the outside. Serving the delicacy with custard doesn’t help much. It’s best to eat the sweet, dried fruit and then look for the dog to finish the rest.

I’ve been to a few educational conferences in the past three months. They, too, have had some sweet treats in a flavorless puddle. The good parts are real and exciting; the boiled suet is soul-crushing.
The conferences have had these general characteristics:
We also need to make sure that the catering staff (mostly students) checks their spelling before lunch.

UMass offers online undergraduate and graduate programs. To learn about the programs, you need to fill out a form and select the program(s) that interest you before you can download a brochure.
The form lists several programs, including some with long names that are truncated by the form window. Too bad. I was wondering what a degree in Education Specialist Degree in Curriculum and I might encompass. 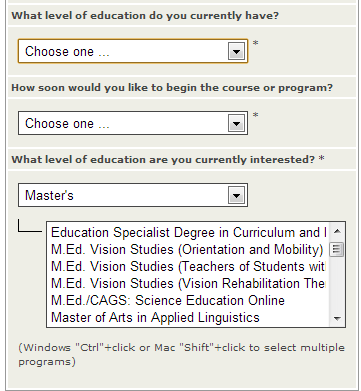 But, wait, there’s more. If you view the source of the page, you can see the full description of the programs. You also see, but without explanation, that the form page starts with 147 blank lines.
If you stumble around the site, you can also find out more about the programs on their Programs page.

Last week’s Technology in Education conference left me with a couple of ideas to ponder:

In 2007, ABC News ran a story, The Future of the Workplace: No Office, about the changing world of work. More than 40% of IBM’s employees don’t have a full-time office in an IBM facility. They work from home, customer sites, hotel rooms, airplanes, or, occasionally, an IBM office that’s set up to support visiting workers.
While K-16 (kindergarten through college) education brings lots of money and attention on science, technology, engineering, and mathematics, the STEM curriculum, little is said about the way that people work.Collaborating with teams around the country or the world requires much more intentional communication. You can’t rely on corridor conversations to exchange ideas or schedule changes. You can’t keep your project plan on a whiteboard in the main conference room.

The people from the Lower Pioneer Valley Educational Collaborative included the ABC story in their presentation. After their talk, I asked the presenters how well educators understood the ways in which work has changed and will change even more. They said that there was little evidence of widespread appreciation of this type of change. Teachers and parents were OK with the new content included in STEM education, but weren’t seeing a need for learning about new ways to work.
Teaching new material in traditional ways fits well, in my opinion, with an educational model that lines up with standardized tests as the measure of educational success. Teaching old or new content in new ways may not.
Watching a couple hundred people sitting and listening to ideas about radically reinventing education is unsettling. It reminds me of my classes in the 60s, where a radical history professor would be spouting revolution and the students in the back of the classroom wondered if the Yippies were going to be on the mid-term.
Every airplane carries a black box (which isn’t really black, but orange so that it can be found easily after a crash) that contains recording devices that stores vital data and voice recordings.

Do you know why they don’t make airplanes the same way that they use in the black boxes? Because the roads aren’t wide enough.
(A plane built like that wouldn’t get off the ground and would have to drive to its destination.)
Educators are keenly aware that they’re measured by the kids’ test scores. Federal and state funding is tied to improvements in the numbers. Change has to be introduced carefully, lest it disrupt what’s already proved to work well enough.
Added to that is an academic environment for educators that rewards obfuscation in language and thought.
The result is a risk-averse spirit that wraps innovation in thick protective layers.
The entrepreneurial spirit that we expect of our kids when they go to work is punished when applied to education. Entrepreneurs know that  meaningful failures are essential to eventual success. An essential element of physical and emotional well-being is resilience, the ability to adapt to change and setbacks and find new ways to move forward.
For the many people in politics and in the general public who don’t like government or educators, lower test score means that schools are failing again. Never mind that the lowered scores might be the result of incompetence or an experiment that didn’t turn out as hoped. The remedies for each type of failure are quite different.
Marco Annunziata is Chief Economist and executive director of Global Market Insight for GE. reported on on GE’s annual Innovation Barometer. More 300 global business leaders who were surveyed said that they want governments to cultivate more innovation in education to prepare students for often chaotic work that’s ahead. One respondent endorsed “strengthening the education system in a way that not only gives students a solid basis of knowledge, but also fuels an entrepreneurial culture and creates a closer alignment with business. “
This new world of work is less than a generation old. We don’t yet have proven methods for educating large numbers of students in the technologies and processes that will be a part of their lives.  We need to try some things, many of which may not work. No one likes the idea of experimenting on our kids. Truth be told, however, I don’t think we have much choice. We’re not going to get them to their future by driving down I-91 in a jet.